The Founder of the page is hopeful that it will gain popularity by naming and shaming employers who are running jobs adverts that unrealistic in their candidate requirements. Ryan Haylock, the page administrator, noted that the purpose of the page is to “To highlight suspiciously crafted employment ads that are submitted to the work permit board by employers.”

He is hopeful that as with other successful naming and shaming social media pages like the Blue Spot and Cayman’s Worst Parking it will compel employers to rethink what on the face of it has been considered rather underhanded tactics in order to discourage employees from applying for jobs.

Sometimes the advert asks for an unrealistic amount of experience for the pay grade or qualifications that are very specific suspiciously tailored towards their existing work permit applicant.

He hopes that by bringing public awareness to employers who make obvious attempts to manipulate the work permit advertisement requirement with such “crafty” adverts the work permit board will begin to take note and more importantly deny such applications.

Currently, there is no mechanism in place to address such ads and they have been the issue of much discussion before both online and on other news websites. Still, nothing has been done to address the ongoing issue.

In one such example recently given to CMR the employer replied to a resume by responding to a job submission with the following email:

This employer runs a local smoothie and fruit stand. When contacted by CMR to explain (1) why he thinks it's customary to provide a photo (2) what he thinks that says about the applicant he requested a telephone number but made no contact at press time.

In another advert listed in one of the printed papers today, the employer is seeking a garbage collector with 10+ years of experience but only willing to pay them $1600 pm. Also, there's an age requirement of at least 25. Many persons have wondered if ads that discriminate based on age, nationality and even gender are fully legal and why no one has challenged them as yet. 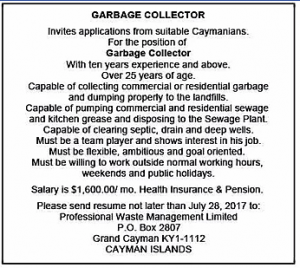 Newlands MLA Alva Suckoo has been a long proponent of reform in this area of employment and remains concerned about the ongoing abuses.

This has long been a tactic used to discourage Caymanians from applying for a job that is subject to a work permit renewal. There needs to be closer monitoring of the job ads and employers who engage in this behavior should be fined. It is sometimes the case that the individual who is here on work permit has been asked to draft the ad themselves and we often see the result in these ads when they are run. It's very unfortunate because when Caymanians see these ads they know they do not stand a chance getting the job and they do not even bother applying. This is a deliberate method used to manipulate the work permit system and it needs to be monitored better and the law enforced.

CMR has reached out to the government for a response to this once posted and will revert back with any comments from them.

No, thanks.
How do you feel after reading this?
Tags: Gone Awry